“It says that I’m unique,” VanDyke said. “First of all, it’s puffy and I like it that way. I know people will tease me about it because it’s not straight. I don’t fit in.” For those who have not been following the story Vanessa VanDyke is a twelve-year-old student at a Christian academy in Florida. Vanessa was asked to either straighten her hair or cut it with in a week or she will be expelled. Vanessa was told her hair was a distraction, because she was being teased.

Vanessa has been attending the academy since the third grade. Vanessa has excelled in her academics as an honor student as well as a violinist. Vanessa has been wearing her hair in an Afro since the beginning of the school year. I say right on to Vanessa VanDyke! She inhabits more strength in her self at the age of twelve, than most African-American women have well after their prime. This post is entitled I’m Vanessa VanDyke for two reasons. The first reason is that as a natural since birth like myself or a newly transitioning natural we should be able to relate to what this young lady is going through. At twelve I went through something similar not quiet as extreme, but it didn’t make it easier. Alike to   Vanessa VanDyke I knew who I was and I wasn’t going to change. I was going through my Afro stage and I wore a green flower in my hair.

Fellow students bullied me for my hair. My middle school counselor and principal asked me about changing my hair. I was who during high school people had nasty things to say. In the present people continue to offer unpleasant remarks. Since when is throwing away who we are   as   African-Americans a choice we should have to make. These decisions have been disguised as   what is considered  “professional”. I never wanted to change! What I would have liked would have been the decency of others to respect me for whom I was! This is what I believe our dear friend Vanessa VanDyke is asking for. The decency of others to respect her for who she is! This is a small request to ask. Remember be curly be happy be you and you will never fail. 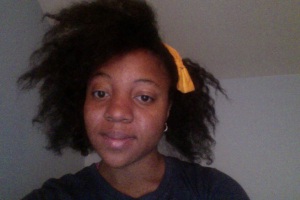