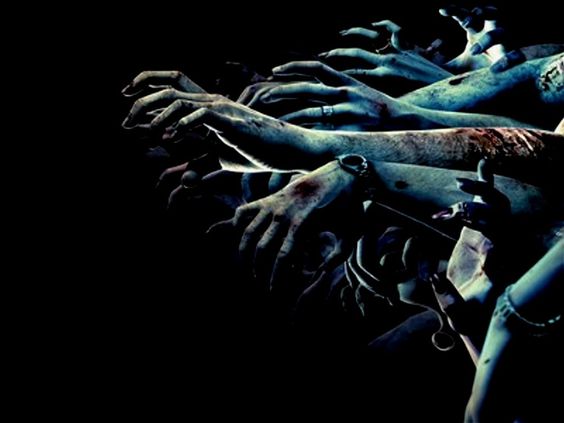 Hello Naturals! I’m sending you coconut oil and Shea butter kisses. With Halloween right around the corner I figured it was a great time to share with you a very scary October night. I’m just going to let the cat out of the bag I am a scaredy cat!

I am the first to jump in a scary movie. I apologize if your ever seated next to me during a thriller. I jump and shriek the entire time. Who knows you might get a great laugh hopefully that’s enough to keep you from hitting me back when I throw my hands up in terror.

Two years ago I was convinced to go to a haunted house with my guy. I had no idea what I had gotten myself into but I was sure to find out. It started off pretty normal well as normal as it could be at place like this. There were multiple buildings and my group of course wanted to go into everyone.

I let them know ahead of time that the last haunted house I went to was many years ago. I went with my high school sports program ISSA and along the way I ripped my pants (not my proudest moment) I haven’t been to a haunted house since. Just a little back story to why ya girl might have been just a tad(more like a ton) freaked out!

Before we entered into the first haunted building one of the workers gave a little speech. He explained that the workers in this haunted asylum were able to touch you. Then he went on to say that if you don’t want your hair touched you should probably wear a hat, but the workers have been known to snatch off hats. I had a hat but it seemed like it wouldn’t be much of a barrier so I took it off before they did.

Needless to say I was not happy about strangers in costumes touching my hair in the dark. The asylum was definitely scary I ran through it almost loosing my group several times. It was so  thrilling I even managed to laugh a few times. However, there was one thing that ruined the mood. Yup! You guessed it they kept touching my hair. I expected it to be a possibility, but it was excessive.

The same person would touch my hair multiple times. I finally fussed them out and told them to stop touching my hair.  I mean they were literally giving me an oil massage with out the oil and with out the clean hands. I didn’t know what to be more terrified of the costumes or their dirty hands.

I don’t know if they were communicating to  each other  with walkie talkies or something but it sure seemed like it . As we went further into the building the worse it got. They weren’t even really jumping out anymore they were just touching my hair. Not only were they violating my hair they started putting their hands into baes hair too. Child! A night of thrill turned into a double wammy wash day. Spending the night washing two full heads of hair was the real horror lol.

My advice to any natural is if you go to a haunted place where they can touch you wrap that hair up tight. I’m telling you your curls will thank you! I had no idea that was the case but if I had talk about the tightest head wrap known to man would have been performed head ache and all. Remember, be happy, be curly, be you, and you will never fail!